Read the directions and directly you will be directed in the right direction. – The Doorknob

The Six Impossible Things spread was so much fun to share with you, I want to make certain you also have some added tools to easily give your readings even more Wonderland context and belief. If you were fascinated by last week’s article, you should think nothing of going further with me now . . .

Down the Rabbit Hole

I happen to believe that the setting and framework of a reading can be the most magically momentous part of the whole experience for the person being read. (In fact, I have an entire article coming your way in the near future that is devoted to nothing else except the reading pre-talk – to borrow a term of art from the craft of hypnosis). I encourage you to stretch your reading skills by embedding in your own thoughts the spellbinding concept that, immediately prior to the reading, itself, is the matchless time to put someone at ease, explain what you will be doing, and, in the fullness of your time together, enthrall them with possibilities.

In some respects, this conditioning may be the most important thing and the greatest service we do for ourselves and the people for whom we read. This is the stage of the Six Impossible Things reading where curiosity is aroused, surprise invited, and miracles are put in motion.

The first thing we are going to explore is an approach to the beginning of the Six Impossible Things reading. The power of curiosity was what propelled Alice down the rabbit hole in the first place. You may recall that the rabbit hole went straight on for a short while and then dipped so suddenly that Alice did not have a chance to stop herself. Asking questions is a notable way to deftly recreate Alice’s rabbit hole tumble.

Before laying out the Six Impossible Things cards for a reading, from a shuffled deck select two Deck of Shadows or Tarot cards and either set them side by side on the table or hold them face down in the palms of your hands. 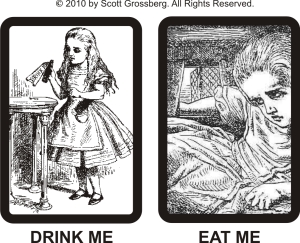 If you’ve put a card in each one of your palm-up hands, just hold them towards the person being read.

Watch their physical responses in addition to hearing what they say.

Let me wander for just a moment and acknowledge that the blue pill/red pill reference is not from Alice in Wonderland. It is from the White Rabbit song by Jefferson Airplane, and then made popular by the movie, The Matrix. Nonetheless, I find that using this allusion adds a keen deepness and needed uncertainty (you can read that as mystery/curiosity) to the reading.

The vital thing to remember here is that you are offering a commanding choice to the person being read. After all, one of the keys to the Six Impossible Things spread is to help someone know what they want in the first place. What a terrific place to start!

The meanings for the two cards are:

CARD ON YOUR LEFT: Small = Moving Away from a Problem :: When someone chooses this card, they are impelled to distance themselves from a situation. The person’s deep rooted value is avoiding pain. This is someone who might default to a worst-case scenario or someone who thinks that a wanted goal is impossible. This is someone who, at the moment, is running from a situation or sensed threat. This person can easily tell you what they don’t want.

In Alice’s story, she became small by drinking the potion she found; the small bottle with the tag that read Drink Me.  Thus, Drink Me represents shrinking and limitation. As the novel goes:

And so it was indeed: she was now only ten inches high, and her face brightened up at the thought that she was now the right size for going through the little door into that lovely garden. First, however, she waited for a few minutes to see if she was going to shrink any further: she felt a little nervous about this; `for it might end, you know,’ said Alice to herself, `in my going out altogether, like a candle. I wonder what I should be like then?’ And she tried to fancy what the flame of a candle is like after the candle is blown out, for she could not remember ever having seen such a thing.

CARD ON YOUR RIGHT: Large = Moving Towards a Solution :: When someone chooses this card, they are propelled towards a chosen goal or desire. The person’s deep rooted value is seeking pleasure. This is someone who looks for end results, conclusions, and effects. Here we have someone who looks at best case scenarios. This person can easily tell you what they want.

In Alice’s story, she became large by eating the unusual cake that she found.  Thus, Eat Me represents growing and opportunity. As the novel goes:

Soon her eye fell on a little glass box that was lying under the table: she opened it, and found in it a very small cake, on which the words `EAT ME’ were beautifully marked in currants. `Well, I’ll eat it,’ said Alice, `and if it makes me grow larger, I can reach the key; and if it makes me grow smaller, I can creep under the door; so either way I’ll get into the garden, and I don’t care which happens!’

Advice from a Caterpillar

`Come back!’ the Caterpillar called after her. `I’ve something important to say!’ 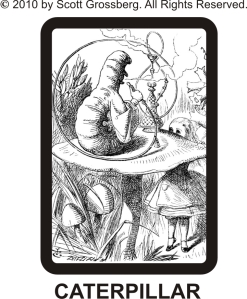 At the conclusion of the Six Impossible Things reading, it is nice to round out what you’ve said with a one card draw that solely answers the Caterpillar’s most important question of all to Alice: Are you content now?

Make certain that you read the answer to this weighty matter in relationship with the rest of the prior discussion.

I have long imagined that the entire adventures of Alice were the dreams of the Red King. In fact, I penned an entire script around that very concept. This notion derives from the following passage from Through the Looking Glass; an inclination that gives you a very charming way to end the entire session.

After you have had the person choose between small or large, after you have gone through the Six Impossible Things, and once you determine whether they are content, it is time to bring our reading to an end. Now you do a final, one card reading – the selection of one card that answers the burning question: Who or what believes in you?

By the way, the passage from the book goes like this:

Alice said `Nobody can guess that.’

`Why, about you!’ Tweedledee exclaimed, clapping his hands triumphantly. `And if he left off dreaming about you, where do you suppose you’d be?’

`Where I am now, of course,’ said Alice.

`Not you!’ Tweedledee retorted contemptuously. `You’d be nowhere. Why, you’re only a sort of thing in his dream!’

`If that there King was to wake,’ added Tweedledum, `you’d go out– bang!–just like a candle!’

`I shouldn’t!’ Alice exclaimed indignantly. `Besides, if I’m only a sort of thing in his dream, what are you, I should like to know?’

He shouted this so loud that Alice couldn’t help saying `Hush! You’ll be waking him, I’m afraid, if you make so much noise.’

`Well, it’s no use your talking about waking him,’ said Tweedledum, `when you’re only one of the things in his dream. You know very well you’re not real.’

`You won’t make yourself a bit realer by crying,’ Tweedledee remarked: `there’s nothing to cry about.’

`If I wasn’t real,’ Alice said–half laughing through her tears, it all seemed so ridiculous–`I shouldn’t be able to cry.’

`I hope you don’t suppose those are real tears?’ Tweedledum interrupted in a tone of great contempt.

Oh, one more thing – imagine the profound mood you add by including a lone candle that you light at the beginning of the session, and then you blow out at the end! This is otherworldly drama at its best because it draws a person into an entire sensory experience.